My friend, D.J. from DJ Foodie, is guest posting for me today!  I’m in the process of moving into my apartment (I know, it’s like I move once a year!).  Since I’m busy unpacking boxes and painting here’s a delicious drink recipe by D.J. 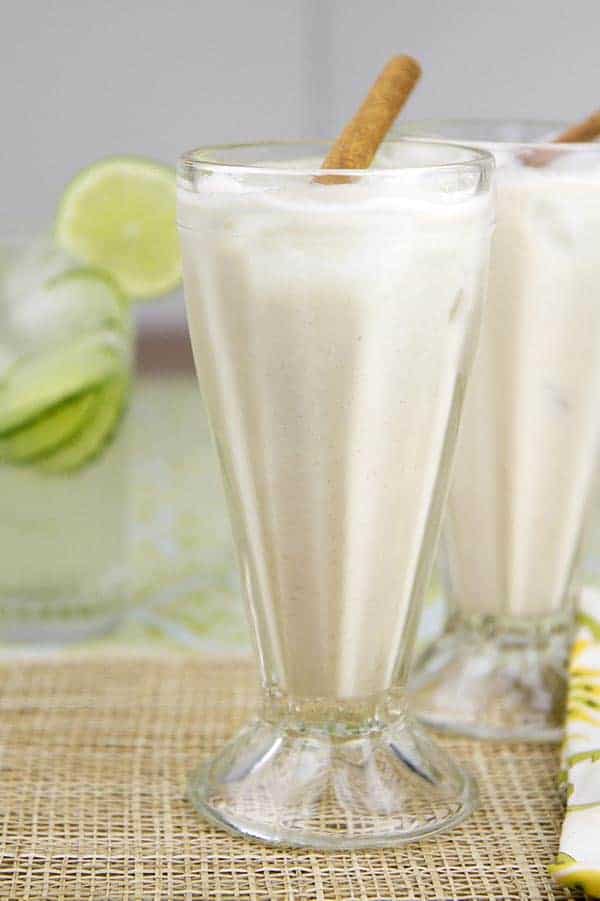 I wish I could remember my first frosty mug of Horchata!  As far as I know, it’s always been in my life.  As a child, much in the same way I’d always order a Thai Iced Tea in a Thai restaurant, I would ALWAYS order “Horchata” in a Mexican one.  Best stuff EVAH!!

“Horchata” (Pronounced OR-CHA-TA … the “h” is silent) is kind of an interesting beverage.  It’s a chilled and sweetened milky white drink in the category of “Agua Fresca” or … “Fresh Water”; a type of non-alcoholic libation.  An “Agua Fresca” is an ingredient, or a mixture of ingredients, with sugar and water added, so as to essentially create a large amount of flavorful hydrating liquid … enough to nourish a large group of people, inexpensively!

As someone who has lived in Mexico for 10 years, in addition to visiting annually, starting in early baby-dom, I’ve seen numerous flavors!    There are shops and restaurants displaying WALLS full of giant chilled “garrafóns” (jugs), which look like massive clear barrels. Because they can be made from just about anything, walking into one of these shops is almost like walking into a candy store. There are brilliant colors and flavors everywhere. A virtual rainbow of colors and flavors! Pineapple, lime, Jamaica (hibiscus), tamarind, oat, rice, orange, almond, mango, strawberry, watermelon, passion fruit, prickly pear, cucumber, etc. There’s a near limitless variety … then … the blends! OH MY!!

I was one of the organizers of a large Farmer’s Market down in Southern Baja Sur.  For each meeting, one of the various committee members would bring an Agua Fresca for us to enjoy.  My favorite was from a local artist named Diego.  His favorite flavor was … Avena, or “Oats.”  It was the soaked grain mixed with nuts and spices, sweetened with grated Piloncillo (a form of brown sugar) and then strained.  This cloudy tan liquid translated into something like a liquid cinnamon roll in my mouth. YUUUuuummmmm …. ! 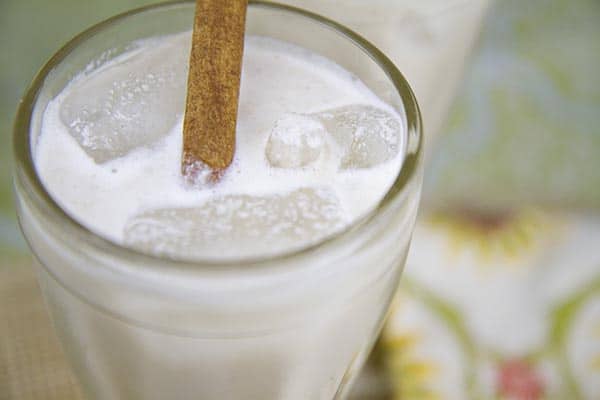 Even though I no longer eat sugar or grains, I still look for these flavors.  See, most “Horchata” served in Mexico or the U.S. is almost always made from rice, a cereal grain.  Most Horchatas you’ll find are a cheap mixture of rice, cinnamon, sugar and water.  Occasionally something like almonds will make its way in to the pot, but it’s usually a relatively simple concoction.

The origin of the word “Horchata” is actually Catalan, a language based largely in Spain … with a small piece of France thrown in, for good measure.  The name actually originated as a European beverage made of Barley.  A different strain of the same drink is still made in Spain, but it is commonly made with the tuber, Tigernuts, and served with a side of Fartons, a sweet pastry.

Travelling a bit further south into Central America, the very much Spanish influenced beverage loses its rice.  In countries like Nicaragua, Honduras and Venezuela, it’s made primarily with nuts and seeds.  This is the geographic area in which I cobbled together this AMAZING dairy-free, grain free and … if you’re me … SUGAR-free recipe!

Sweetener Note: Because I personally try and avoid all forms of sugar, I suggest a sugar replacement based on Erythritol, Inulin and/or
stevia.  However, for a more Paleo approach, honey would make for a delicious sweetener, as well!  The amount listed in the recipe is only a guide.  Sweeten to taste!

A Bit About Me 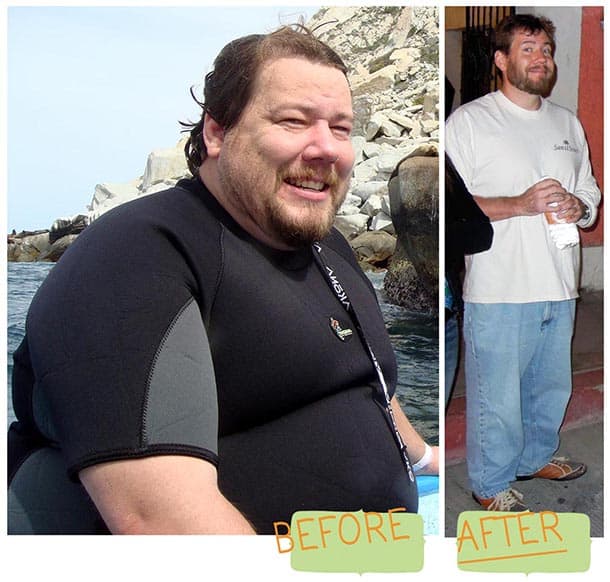 I’m a graduate of the Culinary Institute of America, in Hyde Park, NY. I have worked under some of the best chefs within the United States: in New York, San Francisco, Seattle, Los Angeles and Vail, CO. While I am extremely able to create food, I somehow missed the lesson on “eating” food. For me, it was anything, anywhere, at any time. In early 2010, I had ballooned to 352 lbs and was certain I’d developed diabetes. Life wasn’t good. I read a book promoting a real food, mostly raw, mostly vegetarian diet, at a time I was willing to listen. This started a journey, which has taken me through a variety of eating styles.

Since then, I’ve lost a total of 142 lbs. I am still losing, but slowly. In the interim, I have gained more than I could have ever imagined.

In response to the ubiquitous question, “How’d you do that?!” … I have started a blog, located at DJFoodie.com. My blog is devoted entirely to that question. Near 400 recipes strong, with a new one added regularly, I share my adventures in the kitchen and my life in a lighthearted and humorous manner.

Today, I eat copious amounts of bacon, loads of meats, vegetables and a wide assortment of other ingredients. I focus on lower carb, but also focus a lot of interesting cooking techniques and creative flavor combinations. Regardless of your food preferences, there is a lot of quality information that can be applied to your own food preferences. Take what works … and leave the rest behind!

DISCLOSURE: Not intended for the treatment or prevention of disease, nor as a substitute for medical treatment, nor as an alternative to medical advice. Use of recommendations is at the choice and risk of the reader. Ditch the Wheat is a participant in the Amazon Services LLC Associates Program. As an Amazon Associate I earn from qualifying purchases. I may receive monetary compensation or other types of remuneration for my endorsement, recommendation, testimonial and/or link to any products or services from this blog. I only endorse products that believe in.
Pin
Share
Tweet